Named by Lawrence Lambe in 1913, Styracosaurus is a member of the Centrosaurinae. One species, S. albertensis, is currently assigned to Styracosaurus. Other species assigned to the genus have since been reassigned elsewhere.

It had four to six long spikes coming out of its neck frill, a small horn on each of its cheeks, and a single horn on its nose, which may have been up to 2 ft long and 6 in wide. The use or uses of the horns and frills have been debated for many years.

Styracosaurus was a relatively large dinosaur, reaching lengths of 18 ft and weighing nearly 3 tons. It stood about 6 ft tall. Styracosaurus possessed four short legs, a large body, and ashort tail . The skull had a beak and shearing cheek teeth arranged in continuous dental batteries, suggesting that the animal sliced up plants. Like other ceratopsians, this dinosaur may have been a herd animal, traveling in large groups, as suggested by bonebeds.

The first fossils of Styracosaurus were found in Alberta, Canada by C.M. Sternberg (from a spot now known as Dinosaur Provincial Park, in what is now called the Dinosaur Park Formation) and named by Lawrence Lambe in 1913. In 1935, a Royal Ontario Museum crew went there and found the missing jaw and most of the skeleton. These fossils show that S. albertensis was 5.5-5.8 meters in length and stood 1.65 meters high at the hips.[1] An odd trait of this first skull is that the smallest frill spike on the left side is overlapped in part at its base by the next spike. It seems that the frill was hurt at this point in life and was shortened by about 2 in. The normal shape of this part is not known since the right side of the frill was not found.[2]

In 1915, Barnum Brown and crew, who worked for the American Museum of Natural History in New York, found a nearly complete articulated skeleton with part of a skull in the Dinosaur Park Formation, near Steveville, Alberta. Brown and Erich Maren Schlaikjer saw that while both were from the same place, they were different enough to call for a new species, and described the fossils as Styracosaurus parksi, named in honor of William Parks.[3] Some of the differences between the specimens cited by Brown and Schlaikjer were a cheekbone quite different from that of S. albertensis, and smaller tail vertebrae. S. parksi had a stronger jaw, shorter teeth, and the frill differed in shape.[3] However, most of the skull is a plaster reconstruction, and the first 1937 paper did not describe the actual skull bones.[1] It is now accepted as a specimen of S. albertensis.[2][4]

In 2006, Darren Tanke of the Royal Tyrrell Museum of Palaeontology in Drumheller, Alberta found the long lost S. parksi site.[2] Parts of the skull, clearly abandoned by the 1915 crew, were found. These were collected and it is hoped more will be found, perhaps enough to re-describe the skull and test if S. albertensis and S. parksi are the same. The Tyrrell Museum has several partial Styracosaurus skulls.[5]

A third species, S. ovatus, from the Two Medicine Formation of Montana, was described by Gilmore in 1930. The fossil material is limited, with the best being a part of the frill, but one odd trait is that the pair of spikes near the midline merge towards the midline, not away from it as in S. albertensis. There may have been two sets of spikes on each side of the frill, not three. The spikes are much shorter than in S. albertensis, with the longest only 11.6 in long.[6] A 2010 review of styracosaur skulls by Ryan, Holmes, and Russell found it to be a distinct species.[2]

A lot of other species which were assigned to Styracosaurus have since been assigned to other genera. S. sphenocerus, described by Edward Drinker Cope in 1890 as a kind of Monoclonius and based on a broken Styracosaurus-like straight nose horn, was attributed to Styracosaurus in 1915.[7] "S. makeli", mentioned informally by amateur paleontologists Stephen and Sylvia Czerkas in 1990 in a caption to an illustration, is an old name for Einiosaurus.[8] "S. borealis" is an old informal name for S. parksi.[9]

Styracosaurus is in the Centrosaurinae, a subfamily of large North American horned dinosaurs marked by their "[prominent nose horns, lack of brow horns, a tall, deep face, and a projection in the rear of the nostril.]"[10] Some members of the clade are Centrosaurus (from which the group takes its name),[11][12] Pachyrhinosaurus,[11][13] Avaceratops,[11] Einiosaurus,[13][14] Albertaceratops,[14] Achelousaurus,[13] Brachyceratops,[4] and Monoclonius,[11] but these last two are dubious. Due to variation from species and even individual specimens of centrosaurines, there has been much debate on which genera and species are valid, especially if Centrosaurus and/or Monoclonius are valid genera, undiagnosable, or members of the opposite sex. In 1996, Peter Dodson found enough differences between Centrosaurus, Styracosaurus, and Monoclonius to call for separate genera, and that Styracosaurus looked more like Centrosaurus than either looked like Monoclonius.[15]

The evolutionary origins of Styracosaurus were not known for years since fossils for early ceratopsians were sparse. When Protoceratops was found in 1922, it shed light on early ceratopsid relationships,[16] but a few decades passed till more finds filled the gap. New findings in the late 1990s and 2000s, such as Zuniceratops, the first known ceratopsian with brow horns, and Yinlong, the first known Jurassic ceratopsian, show what the ancestors of Styracosaurus may have looked like. These new findings have shed light on the origins of horned dinosaurs as a whole, and suggest that the group originated in the Jurassic in Asia, with true horned ceratopsians appearing by the start of the late Cretaceous in North America.[4]

The large nasal horns and frills of Styracosaurusare one of the most distinct face adornments of all dinosaurs. Their role has been discussed since the first horned dinosaurs were found. Early in the 20th century, paleontologist R. S. Lull proposed that the frills of ceratopsians served to anchor their jaw muscles.[17] He later noted that for Styracosaurus, the spikes would give it a formidable appearance.[18] In 1996, Dodson supported the idea of muscle attachments in part and created detailed layouts of likely muscle attachments in the frills of Styracosaurus and Chasmosaurus, but did not subscribe to the idea that they completely filled in the fenestrae.[19] But, C.A. Forster found no evidence of large muscle attachments on the frill bones.[20]

It was long thought that ceratopsians like Styracosaurus used their frills and horns in defense against the large meat-eating dinosaurs of the time. While pitting, holes, lesions, and all kinds of harm on ceratopsid skulls are often attributed to horn damage in combat, a 2006 study found no evidence for horn thrust injuries that caused these forms of damage (for example, there is no evidence of infection or healing). Instead, non-pathological bone resorption, or unknown bone diseases, are suggested as causes.[21]

The large frill on Styracosaurus and their relatives may have helped raise body area to regulate body temperature,[22] like the ears of the modern elephant. A similar theory has tried to explain the plates of Stegosaurus,[23] but just this use would not account for the bizarre arrangements seen in Ceratopsians.[24] This suggests that the main function was display.

The theory of frill use in sexual display was first proposed in 1961 by Davitashvili. This theory has gained much acceptance.[20][25] Proof that visual display was important, in courtship or in other social behavior, can be seen in the fact that horned dinosaurs differ markedly in their adornments, making each species highly distinctive. Also, modern living creatures with such displays of horns and adornments use them in similar behavior.[26] 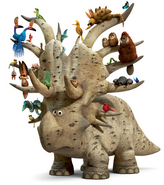