Dinosaur Wiki
Register
Don't have an account?
Sign In
Advertisement
in: Fictional Dinosaurs, Antagonists, The Land Before Time characters, Theropods

"Although one of his eyes were swolen shut, he was growling softly, enjoying his moment of revenge."
— The Narrator, descriping Sharptooth's thoughts in The Land Before Time: The Illustrated Story.

Little of Sharptooth's personality is seen in the movie. However, the book that was sold along with the original movie gives more insight on his actual thoughts. Sharptooth seems the vain to the extent that where he feels that his looks should go unscathed and if so happen they do he becomes very angry about this. This is evident as to why he not only had vengence on Littlefoot and his mother, but to Cera as well.

Sharptooth appears to be very persistent, given by the fact that he continues fighting Littlefoot's Mother despite the Earthshake and his multiple wounds, and that he continues to pursue the main characters throughout the movie, even though they would be of little food to him. According to the book, much of this persistance is derived from vengeance, as he takes pleasure in cornering Littlefoot and Cera after the former had accidently stunned his one eye with a thorn. This goes for the to the extent where he feels it vain that anyone associated with the duo should be killed along with them (this heavily shown in the film when he meets main Littlefoot and Cera a second, but goes to attack the members of group even though never meeting them). It is evident that he will continue fighting even when it is obviously hopeless, snapping at the children even when his head is trapped in a small tunnel and they are far out of reach. He doesn't stop trying when he is in extreme danger, as he tries to crush Littlefoot and Cera while falling to his apparent doom in the Great Earthshake, and pulls Petrie down with him in his last moments, plummeting into a lake.

It is shown in the book that Sharptooth does not forget grudges he holds against others; it is explained that after he spots the main characters for the second time, he immediately recognizes them and thunders towards them in a bout of hatred. Even after they escape through the narrow pathway he continues to claw and snap at them with rage. Sharptooth also feels somewhat protective of his pride as if someone smaller insults or manages to hit him, he sets his sights on that target and will try to kill them.

It is also implied in the book that Sharptooth is very sadistic and enjoys killing, as it is said that when he finds the entrance Great Valley he sniffs the air with "evil joy", suggesting that he may get more out of killing than just food.[3]

Sharptooth appears to possess a near supernatural level of strength, incrediable endurance, and athleticism, even for a Tyrannosaurus, as shown by him crawling through sharp thorns after Littlefoot and Cera with nary a scratch, withstanding multiple tailwhips to the face from Littlefoot's mother, slamming his head through solid rock with no apparent ill effects, and surviving a long drop into the canyon opened up by the earthquake. He is also shown to be capable of massive leaps, even jumping straight up into the air onto a cliff at the film's climax, as well as apparently being able to see just fine despite having only one good eye.

Sharptooth's relationships with the characters he has been shown to interact with have all been negative. He attempts to eat the main characters and fatally wounds Littlefoot's mother. His relationship with Littlefoot is particularly hostile, as he despises him for (although inadvertedly) stunning his eye with a thorn. He also has a grudge against Cera for charging into his face while thinking he was dead. It is stated in the book that he wants revenge on the children for the trouble they've caused him. As evidenced in the trailer and film itself, Sharptooth seems to protective of his pride and thus anyone whom humilates him he eventually retaliates on. His personal vendetta is vain to the extent where it seems anyone associated with Littlefoot and Cera, he will have no problem trying to kill them.[4]

Sharptooth first appears when he approaches Littlefoot and Cera, who are playing together in a swamp. Sharptooth, who is probably hungry, chases them into a thicket of thorns. He plods through the thorns after them, and leans down through the thorns to catch Littlefoot. The young Longneck tries to run but gets caught on a vine. As Sharptooth nears him, he escapes and the thorn-covered vines snap back at Sharptooth's face, injuring his right eye and causing him to bellow out in pain. Furious, Sharptooth stands up and resumes his pursuit of the two children, only for Littlefoot's Mother to intercept him. In the ensuing fight, Sharptooth is hit several times with her tail, but eventually succeeds in jumping onto the large Longneck's back and tears off some of her flesh. She manages to dislodge him and knock him back again, but as the herbivores attempt to escape, a massive earthquake strikes the area. Quickly recovering, Sharptooth charges in the direction of Littlefoot and Cera again, partially trying to dispose of the two youngsters and partly in an attempt to save his own life from the raging earthquake. In their panic, the children are fliped onto Sharptooth's foot, and at that moment the quake tears the ground beneath them apart, and Sharptooth slides down the slope with his would-be prey on his back. As the children yell for help, Littlefoot's mother comes to the rescue; she grabs the children and knocks Sharptooth off the edge, sending him falling into the chasm below. Littlefoot's mother dies later that night, probably due to severe infections from the wounds on her back inflicted by Sharptooth.

Later, after falling into the "Big Underground" herself, Cera finds Sharptooth's apparently dead body. Cera rams his head repeatedly until he suddenly awakes, having only been knocked out and was staring straight at her with her not completely damaged eye. The young dinosaur quickly flees in terror as the beast rises behind her. Shortly afterwards, she meets up with Littlefoot and his new friends; Ducky, a Bigmouth, and Petrie, a Flyer. Cera explains her encounter with Sharptooth, but exaggerates it, making it sound as if she bravely fought him. While Ducky and Petrie believe Cera immediately, Littlefoot is convinced that Sharptooth has been killed. He holds this belief until, one morning, the fearsome beast himself ambushes the gang (by then including a Spiketail named Spike). The children barely manage to escape Sharptooth though a small hole in a rock wall, which Sharptooth tries to squeeze through while snapping and clawing at the children, but he is too big to fit through and they escape.

The next day, a humiliated Cera has left them after they escaped a volcanic region she herself lead them into. Littlefoot, Ducky, Petrie, and Spike happen to see Sharptooth nearby while they are swimming in a deep lake. Tired of running and intent on avenging his mother, Littlefoot, guessing that Sharptooth can't swim, comes up with a plan to get rid of him for good. Baiting him with Ducky, they set their plan into motion. Sharptooth chases Ducky to the lake, while Petrie stands on a nearby ledge waiting to give a signal to Littlefoot and Spike, who are waiting to push a huge boulder off of a ledge onto Sharptooth. However, even after Sharptooth accidentally helps Petrie master his flight abilities, the plan is seemingly doomed to fail until Cera returns and helps push the boulder down onto Sharptooth. In a final act of rage and desperation, Sharptooth takes Petrie down with him as he plunges into the lake sinking to the bottom which kills him, ending his terror and avenging Littlefoot's mother. After moments, the remaining children start to walk away, believing Petrie to be dead. However the Flyer manages to surface and fly back to his friends, and they all rejoice and then they go to The Great Valley. (Note: If you watch the scene where Sharptooth lands in the water in slow motion, you can see that Sharptooth had opened his mouth. This could explain why Petrie was safe and wet.

Sharptooth is mentioned in the Land Before Time book, Grandpa and Me. Littlefoot says that he'll someday scare Sharptooth away, but for now Grandpa protects him. This shows that this part of the book takes place before Littlefoot finds the Great Valley.

Sharptooth has not gotten as much merchandise as other characters, but has received a moderate amount compared to other one-movie characters. He is also the only known antagonist to receive merchandise. A hand-puppet of him was distributed at Pizza Huts along with the other main characters during the movie's theatrical release.

San Francisco Punk Rock band 'Set Your Goals' released a song called "Sharptooth" on their first demo tape, claiming while the song's content doesn't touch on the character himself, they were big fans of the movie as kids.

Sharptooth has appeared in several fanfics, mainly ones about him surviving his encounter with Littlefoot and his friends and wanting revenge.[5]

"Littlefoot and Cera stood in the shadow of the most ferocious and deadly creature in the land—Sharptooth!"
— The book's narrator on Sharptooth.

"The monster bellowed in pain and reared back from the brambles. Then, with a terrible fury, he plunged back into the thicket, searching for the puny creatures that had dared to injure him."
— Narrator describing Sharptooth's actions after his eye is hit by the thorn.

"Even in his terror, the huge beast saw his chance to crush the tiny creatures who had caused him so much trouble."
— Sharptooth's thoughts as he is falling down into the "Big Underground".

"With another terrible cry, the big beast thundered toward them, his enormous mouth wide open and his one good eye glinting with hatred."
— Book quote showing Sharptooth's hatred for the children. 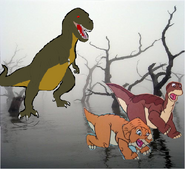