Phorusrhacos (meaning Bearer Wrinkle) is an extinct, giant flightless predatory bird called a Terror Bird that lived in Patagonia in South America during the Miocene to the early Pleistocene epoch. P. longissimus closest living relative is the much small Seriema of modern South America. This terror bird roamed the grasslands and woodlands where it hunted its prey.

P. longissimus stood up to 2.5 meters (8.2 feet) tall and weighed approximately 130 kilograms (290 lbs). It had an enormous skull up to sixty centimeters long, armed with a powerful, hook-tipped beak. The structure of the beak and the long claws on its toes show that the bird was carnivorous.

Phorusrhacos from Walking with Beasts. 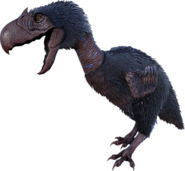 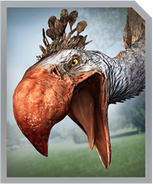 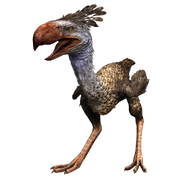 Phorusrhacos from the 1961 film The Mysterious Island. 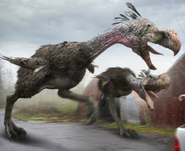 Phorusrhacos from the film Journey to the beginning of Time.
Community content is available under CC-BY-SA unless otherwise noted.
Advertisement