In the attraction, guests board vehicles called Time Rovers and are taken on a turbulent journey through the Cretaceous period, featuring prehistoric scenes populated with audio-animatronic dinosaurs. Originally named Countdown to Extinction, the ride's name was later changed to DINOSAUR to promote the Disney animated film of the same name, even though the attraction has never contained any explicit references to the film. However, the two dinosaurs most prominently featured in the ride have always been an Iguanodon and Carnotaurus, which were both featured prominently in the film. Scenes from the movie also appear in the pre-show, to help the guests identify the Iguanodon as the film's protagonist, Aladar.

Guests enter the Dino Institute, a state-of-the-art paleontological research facility. After moving through the queue area, which features real dinosaur remains (including a Carnotaurus skeleton) and a background narration by Bill Nye the Science Guy, they are taken to a room where they watch a pre-show video. The ride's pre-show film director is Jerry Rees, best known for his animated film The Brave Little Toaster. It was written by Steve Spiegel, with Reed Smoot as director of photography.

In the video, Dr. Marsh (Phylicia Rashād) announces that the guests are about to board Time Rovers that will take them on peaceful tours of the early Cretaceous period. As she finishes, however, Dr. Seeker (Wallace Langham) cuts off Marsh from his laboratory, and informs the guests that he plans to send them to a time towards the end of the late Cretaceous period so that they can rescue Aladar, whom he has previously tagged, from extinction on an 'unauthorized field trip'. Dr. Marsh overhears Dr. Seeker and enters his lab, arguing that the mission is too dangerous, as the time the guests would be sent to is extremely close to the time when the meteor that killed the dinosaurs hits. After Dr. Marsh has left, Dr. Seeker says that he has hacked the time travel systems so that the guests can go to rescue Aladar, and reassures the guests they'll be out before the meteor breaks the atmosphere.

The guests exit the pre-show area and proceed down a staircase to the underground loading area. Disney cast members dressed as Dino Institute workers stand at control panels for the Time Rovers. Through windows in the walls (actually projection screens), guests can see that the room is surrounded by lava. Guests board a Time Rover and the vehicle proceeds around a corner and inside the time tunnel.

Lights flash around the guests, then the lights go out and a field of stars appears briefly around them before a prehistoric jungle scene fades into view.

The Time Rover drives through the jungles looking for the tagged Iguanodon, guided by Seeker. A Styracosaurus near a volcanic vent leans against a tree, pushing it dangerously near to the vehicle. An Alioramus is shown eating a Brachychampsa, whose legs and tail wiggle in the grasp of the dinosaur's jaws. A mother Parasaurolophus (mentioned less specifically as a hadrosaur) watches over her young and a lone Velociraptor (mentioned as a raptor) stands on a ledge in search of prey. Suddenly, Seeker locks the Time Rover's autopilot on a homing signal that he thinks will lead the guests to the Iguanodon. They take off at a rapid speed through the jungles, but the dinosaur they come to stop in front of is not the Iguanodon, but a dangerous Carnotaurus.

The Time Rover speeds away frantically, jerking left and right, the tires screeching, and they come to a stop near a peaceful herbivore, Saltasaurus (mentioned as a sauropod). Seeker insists that they keep moving, or else they won't be able to make it back to their own time before the meteor hits. The Time Rover enters a clearing in the jungle where a thunderstorm rages behind the trees and where two baby Cearadactylus are perched. The vehicle goes down a drop just in time to avoid a collision with a larger, flying Cearadactylus (mentioned as a pterodactyl). As the guests fall down the drop, more small, leaping Compsognathus pass over their heads.

They enter complete darkness and the vehicle computer informs of a 'loss of traction'. Suddenly, after a few movements through the dark, strobe lights flash to reveal the Carnotaurus. The dinosaur walks toward the vehicle, and the guests flee from the predator and take many left and rights turns, only to meet up with it again. For the first time, the obstreperous Carnotaurus raises itself to its full height and roars loudly (it is here where the on-ride picture is captured). The vehicle drives away again and Seeker tries desperately to abort the mission, but to no avail.

The Time Rover proceeds down a path where large trees are tipping toward it. The Iguanodon appears, but Seeker nevertheless tries to abort, as he struggles to hold up a fallen tree so that the guests can pass under. They pass safely by when the Time Rover's computer announces that there are only a few seconds to spare before the meteor impact. Seeker, unable to initiate the time travel sequence fast enough, warns the guests to brace themselves. The boom of the meteor resounds through the jungles and a flash of light from the impact briefly illuminates the area so that the guests can see the Carnotaurus lunging toward them. The Time Rover plunges down a slope into complete darkness, then once again, stars appear. Lights come on so that the guests find they are inside the time tunnel, as Seeker fears that the guests won't make it back in time. They exit the tunnel and see on a television screen that the Iguanodon, who apparently followed guests into the time tunnel, is wandering the halls of the institute. Seeker thanks the guests for their help and excuses himself so he can find the Iguanodon "before security does."

Dinosaurs featured in the ride (in order of appearance)

Changes since the release of the film

Shortly after the release of the film on May 19, 2000, the attraction underwent many changes to make it closer to the film. The attraction would now be marketed as a direct companion to the film, rather than a subtle tie-in. Though originally named "Countdown to Extinction", its name was changed to "DINOSAUR". The original logo was taken down from the entrance building and replaced with a new sign of the logo for the film. The original statue of the Styracosaurus in front of the building was taken away and replaced with a statue of Aladar. Now that the attraction was marketed as a tie-in to the film, more children would be riding. Because of this, the movement of the enhanced motion vehicles was changed to be less intense and the ride was also given a less frightening soundtrack. In the original soundtrack, after the encounter with the first audio-animatronic Carnotaurus, the footsteps and roars of the dinosaur could be heard directly behind the vehicle, giving guests the feeling that they were being pursued. Now, during the same moments of the ride, the roars of the Carnotaurus can be heard far behind the guests, implying they have safely escaped.

In April 2005, a 30-year-old from Mooresville, Indiana lost consciousness shortly after exiting the ride and later died. He wore a pacemaker, and the victim's parents said he had a heart condition. An investigation showed the ride was operating correctly and was not the cause of death.

Palaeosaniwa was getting eaten by an Alioramus. 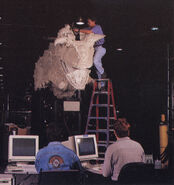 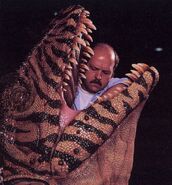 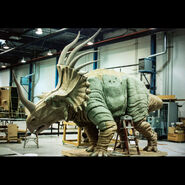 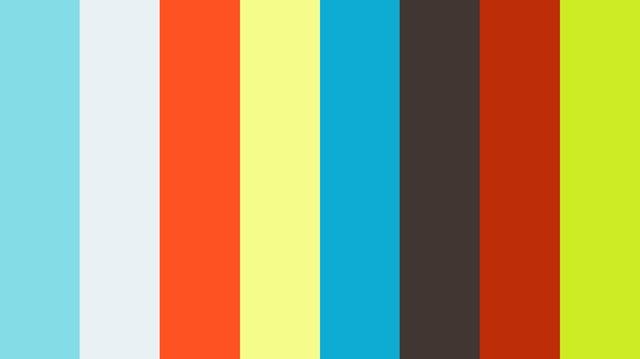 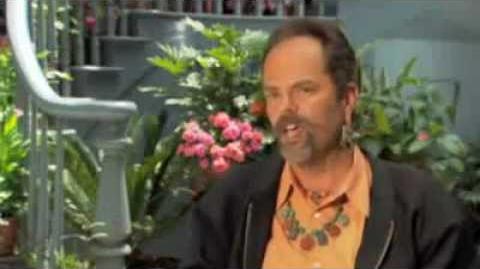 Disney World- Behind the Scenes- Dinosaur 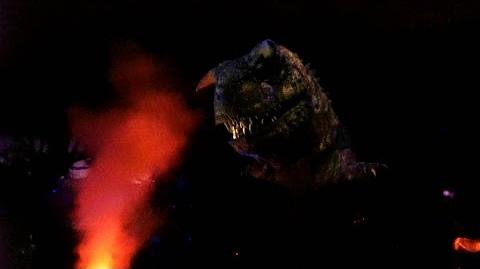 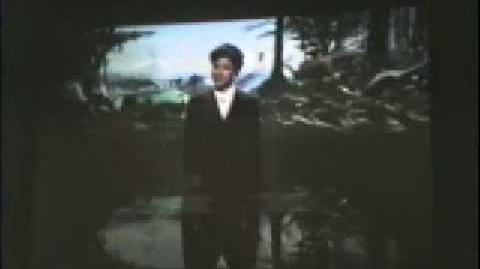 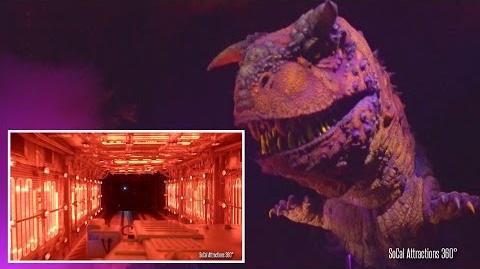 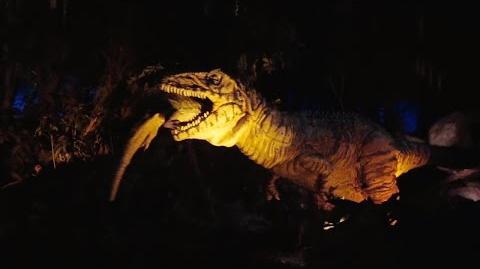 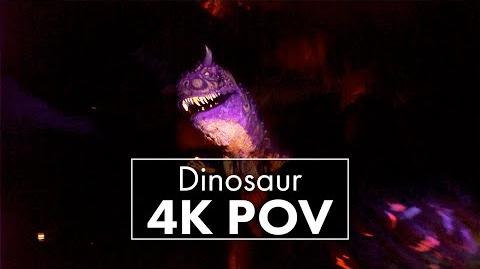 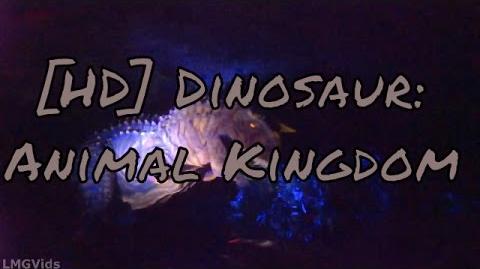 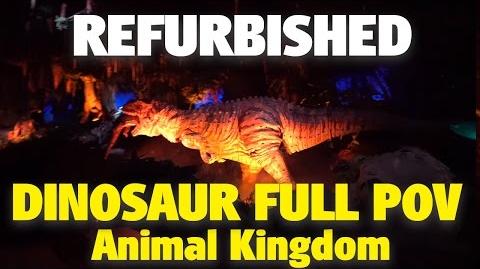 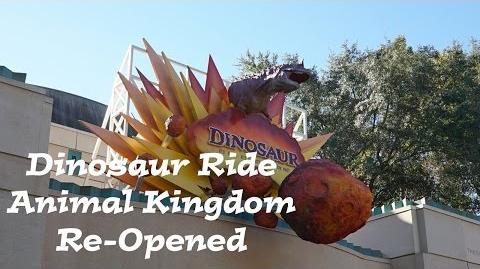 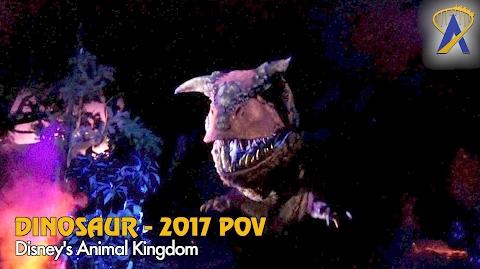