Dino-Riders is an American animated television series that first aired in 1988.[1] Dino-Riders was primarily a promotion to launch a new Tyco toy line.[2] Only fourteen episodes were produced, three of which were produced on VHS for the United States.[2] It aired in the U.S. as part of the Marvel Action Universe.[2]

The series focuses on the battle between the good Valorians and evil Rulons on prehistoric Earth.[2] The Valorians were a super human race, whilst the Rulons were a mixture of humanoid creatures — both of which came from the future, however ended up transported back in time to the age of Dinosaurs. Once on Earth, the Valorians befriended dinosaurs whilst the Rulons brain-washed them.[2]

The Valorians were a peaceful race that had lived in harmony until the evil Rulons came and attacked them.[2] The Valorians tried to escape from the Rulon assault and attempted to use their "Space Time Energy Projector" (S.T.E.P.) to do so, however something went wrong and they ended up being sent back through time to the age of the dinosaurs.[2] Unbeknownst to them the Rulons in the spaceship Dreadlock were also sent back through time when the S.T.E.P. was activated.[2]

The Valorians, led by Questar, after making planet-fall use their AMP necklaces to telepathically communicate with the dinosaurs they come across and befriend them.[2] The Rulons, led by their leader Krulos, on the other hand used brainwashing devices known as brain-boxes to control dinosaurs for their own ends.[2] The Rulons then launched an attack on the Valorians, who call upon their dinosaur friends to assist them in fighting back. After successfully defeating the Rulons, the Valorians declare themselves to be the Dino-Riders.[2]

In regard to the dinosaur (and other animal) species present, the series is extremely anachronistic, showing late Cretaceous species like Tyrannosaurus rex alongside species from earlier eras, including the Permian genus Dimetrodon, which lived 200 million years earlier, before dinosaurs existed.

The Commandos are a special forces military unit within the Dino-Riders.[3]

The Dino-Riders cartoon consisted of a single season of 14 episodes.[4] Below is a list of each episode along with the date they first aired.[1]

The voice actors for the Dino-Riders cartoon were:[5]

Contrary to popular belief, Chris Latta did not work on the series—let alone voice the character of Rasp.[6]

The larger toys in the range also had a motorized walking action with the dinosaurs head swaying from side to side.[9] Each Rulon faction toy came with a different self-automated trap.[9]

The dinosaurs were acclaimed for their highly detailed bodies and color and impressed the Smithsonian Institution who contacted Tyco to reproduce the dinosaurs for their "Dinosaur and other Prehistoric Reptile Collection".[10] In contrast to the Dino-Riders versions, all mechanisms such as motorized walking action and wheels were removed.[10] Dinosaur illustrator William Stout was credited for dinosaur design on the show's credits.

The release of the first series of Dino-Riders toys was timed to coincide with the animated cartoon series on television.[9] It initially consisted of 5 Valorian and 6 Rulon toys along with eight 2-figure packs.[9] A sixth Valorian toy, Torosaurus, would be released at the end of the series.[11] The Diplodocus,[12] Torosaurus,[11] Tyrannosaurus Rex,[13] and Triceratops[14] all had motorized walking mechanisms.

The second series of Dino-Rider toys consisted of eight new Valorian toys and only three new Rulons.[15] Along with this was eight more 2-figure packs as well as six "Commandos". The Commandos consisted of a human figure with unique weapons and accessories.[15]

The most notable toy from the range was the Brontosaurus which was the biggest toy in the entire range measuring 34 inches long and 15 inches tall.[16] It is claimed that Tyco in an effort to keep costs for the figure down had to abandon several features that where originally intended to be part of the figure.[17] These included motorized walking action, four figures instead of three, and an entirely different weapons system.[17]

Series 3 of the Dino-Riders toyline was split into two assortments: three new dinosaurs for the regular series and four prehistoric mammals for the new Ice Age concept.[22] The dinosaur sets are amongst the rarest of the entire range due to a limited production run.[23]

The Quetzalcoatlus had originally been released as a Valorian in Series 1 of the Dino-Riders toyline, however was re-released as a Rulon with a new yellow and spotted black paint scheme.[24][25] The Pachyrhinosaurus in the line had motorized walking action.[23]

The Ice Age subline of Series 3 was unique in that all of the animals produced belonged to the Valorian faction, and with the rest of the Series 3 line are very hard to find.[26] The largest figure in the range was the Wooly Mammoth which also had motorized walking action.[27]

Apart from the miniature comics that came with a purchase of one of the Dinosaur toys, Marvel released a three part mini series of Dino-Rider comics. The comics had different story lines to the cartoon and were considered to be much darker than the cartoon as well, sometimes focusing on conflicts between the Valorians. For instance, one storyline involves Questar being accused of murdering his jealous, scheming brother, Tark.

A 'Dino-Riders Annual' was later released as a hardcover book that contained both the first and second issues in the one collection. The Marvel comic books were released in 1989, the first issue, The Path being released in February, being 23 pages long. 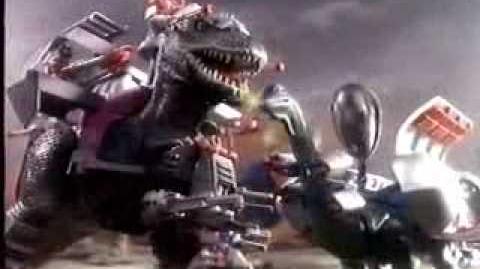 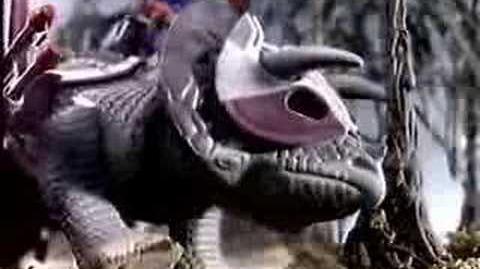 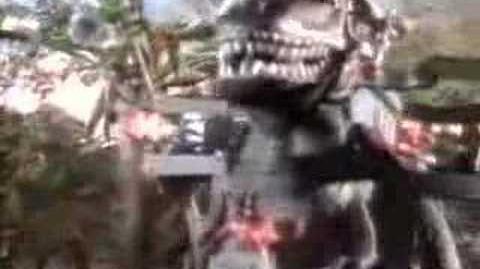