Deinonychus (Terrible Claw) is a spectacular, but fairly small dinosaur. It measured about five to seven feet tall, and about twelve feet long. Its weight is estimated at 150-200 pounds. Bones of several individuals of Deinonychus have been found with the skeleton of a large, plant eating dinosaur, called Tenontosaurus. This has been historically interpreted as evidence of pack hunting, though most experts nowadays think it was a scavenger congregation. At any rate, modern pack hunting animals can't bring down prey that is too large, and Tenontosaurus was roughly as big as a rhinoceros, compared to the dog-sized Deinonychus.

Deinonychus belongs to a family of dinosaurs called dromaeosaurs. They all share the same characteristics; a lightly built skull with sharp backwardly curved teeth, elongated arms and hands with sharp claws, and an extraordinary sickle-like second toe claw which was carried raised off the ground to protect the sharp point. Dromaeosaurs probably had keen vision and their brains were relatively large for a dinosaur. The dromaeosaurs lived throughout the Cretaceous period, 140 to 65 million years ago.

Deinonychus was highly specialized for swift movement and savage attack. With its terrible claw flicked forward it slashed its prey with one foot while standing on the other. This kind of behavior required good coordination, excellent eyesight and a high level of energy.

Fossilized remains of Deinonychus have been recovered from the Cloverly Formation of Montana and Wyoming and in the roughly contemporary Antlers Formation of Oklahoma, in North America. The Cloverly formation has been dated to the late Aptian through early Albian stages of the early Cretaceous, about 115 to 108 MYA.Additionally, teeth found in the Arundel Clay Facies (mid-Aptian), of the Potomac Formation on the Atlantic Coastal Plain of Maryland may be assigned to the genus.

The first remains were uncovered in 1931 in southern Montana near the town of Billings. The team leader,

paleontologist Barnum Brown, was primarily concerned with excavating and preparing the remains of the ornithopod dinosaur Tenontosaurus, but in his field report from the dig site to the American Museum of Natural History, he reported the discovery of a small carnivorous dinosaur close to a Tenontosaurus skeleton, "but encased in lime difficult to prepare."He informally called the animal "Daptosaurus agilis" and made preparations for describing it and having the skeleton, specimen AMNH 3015, put on display, but never finished this work.Brown brought back from the Cloverly Formation the skeleton of a smaller theropod with seemingly oversized teeth that he informally named "Megadontosaurus". John Ostrom, reviewing this material decades later, realized that the teeth came from Deinonychus, but the skeleton came from a completely different animal. He named this skeleton Microvenator.

A little more than 30 years later, in August 1964, paleontologist John Ostrom led an expedition from Yale University’s Peabody Museum which discovered more skeletal material near Bridger. Expeditions during the following two summers uncovered more than 1000 bones, among which were at least three individuals. Since the association between the various recovered bones was weak, making the exact number of individual animals represented impossible to determine properly, the type specimen (YPM 5205) of Deinonychus was restricted to the complete left foot and partial right foot that definitely belonged to the same individual. The remaining specimens were catalogued in 50 separate entries at Yale's Peabody Museum of Natural History.

Later study by Ostrom and Grant E. Meyer analyzed their own material as well as Brown's "Daptosaurus" in detail and found them to be the same species. Ostrom first published his findings in February 1969, giving all the referred remains the new name of Deinonychus antirrhopus. The specific name "antirrhopus", from Greek ἀντίρροπος, means "counterbalancing" and refers to the likely purpose of a stiffened tail.In July 1969 Ostrom published a very extensive monograph on Deinonychus.

Though a myriad of bones was available by 1969, many important ones were missing or hard to interpret. There were few postorbital skull elements, no femurs, no sacrum, no furcula or sternum, missing vertebrae, and (Ostrom thought) only a tiny fragment of a coracoid. Ostrom’s skeletal reconstruction of Deinonychus included a very unusual pelvic bone – a pubis which was trapezoidal and flat, unlike that of other theropods, but which was the same length as the ischium and which was found right next to it.

suggesting that pack hunting is possible.

A recent study by Roach and Brinkman has called into question the cooperative pack hunting behavior of Deinonychus, based on what is known of modern carnivore hunting and the taphonomy of tenontosaur sites. Modern archosaurs (birds and crocodiles) and komodo dragons display little cooperative hunting; instead, they are usually either solitary hunters, or are drawn to previously killed carcasses, where much conflict occurs between individuals of the same species. For example, in situations where groups of komodo dragons are eating together, the largest individuals eat first and will attack smaller komodos that attempt to feed; if the smaller animal is killed, it is cannibalized. When this information is applied to the tenontosaur sites, it appears that what is found is consistent with Deinonychus having a komodo- or crocodile-like feeding strategy. Deinonychus skeletal remains found at these sites are from subadults, with missing parts consistent with having been eaten by other Deinonychus. On the other hand, a paper by Li et al.. describes track sites with similar foot spacing and parallel trackways, implying gregarious behavior, though not coordinated pack hunting.

Geological evidence suggests that Deinonychus inhabited a floodplain or swamplike habitat.The paleoenvironment of both the upper Cloverly Formation and the Antlers Formation, in which remains of Deinonychus have been found, consisted of tropical or sub-tropical forests, deltas and lagoons, not unlike today's Louisiana. Other animals Deinonychus shared its world with include herbivorous dinosaurs such as the armored Sauropelta and the ornithopods Zephyrosaurus and Tenontosaurus. In Oklahoma, the ecosystem of Deinonychus also included the large theropod Acrocanthosaurus, the huge sauropod Sauroposeidon, the crocodilian Goniopholis, and the gar Lepisosteus. If the teeth found in Maryland are those of Deinonychus, then its neighbors would include Astrodon and a nodosaur called Priconodon only known from teeth. The middle portion of the Cloverly Formation ranges in age from 115 ± 10 Ma near the base.to 108.5 ± 0.2 Ma near the top. In a 2001 study conducted by Bruce Rothschild and other paleontologists, 43 hand bones and 52 foot bones referred to Deinonychus were examined for signs of stress fracture, but none were found.

Bite force estimates for Deinonychus were first produced in 2005, based on reconstructed jaw musculature. This study concluded that Deinonychus likely had a maximum bite force only 15% that of the modern American Alligator. A 2010 study by Paul Gignac and colleagues attempted to estimate the bite force based directly on newly discovered Deinonychus tooth puncture marks in the bones of a Tenontosaurus. These puncture marks came from a large individual, and provided the first evidence that large Deinonychus could bite through bone. Using the tooth marks, Gignac's team were able to determine that the bite force of Deinonychus was significantly higher than earlier studies had estimated by biomechanical studies alone. They found the bite force of Deinonychus to be between 4,100 and 8,200 newtons, greater than living carnivorous mammals including the hyena, and equivalent to a similarly sized alligator.

Gignac and colleagues also noted, however, that bone puncture marks from Deinonychus are relatively rare, and unlike larger theropods with many known puncture marks like Tyrannosaurus, Deinonychus probably did not frequently bite through or eat bone. Instead, they probably used their high bite force in defense or prey capture, rather than feeding.

Dromaeosaurids, especially Deinonychus, are often depicted as unusually fast-running animals in the popular media, and Ostrom himself speculated that Deinonychus was fleet-footed in his original description.However, when first described, a complete leg of Deinonychus had not been found, and Ostrom's speculation about the length of the femur (upper leg bone) later proved to have been an overestimate. In a later study, Ostrom noted that the ratio of the femur to the tibia (lower leg bone) is not as important in determining speed as the relative length of the foot and lower leg. In modern, fleet-footed birds like the ostrich, the foot-tibia ratio is .95. In unusually fast-running dinosaurs like Struthiomimus, the ratio is .68, but in Deinonychus, the ratio is .48. Ostrom stated that the "only reasonable conclusion" is that Deinonychus was not particularly fast compared to other dinosaurs, and certainly not as fast as modern flightless birds.

The low foot to lower leg ratio in Deinonychus is due partly to an unusually short metatarsus (upper foot bones). The ratio is actually larger in smaller individuals than in larger ones. Ostrom suggested that the short metatarsus may be related to the function of the sickle claw, and used the fact that it appears to get shorter as individuals aged as support for this. He interpreted all these features – the short second toe with enlarged claw, short metatarsus, etc. – as support for the use of the hind leg as an offensive weapon, where the sickle claw would

strike downwards and backwards, and the leg pulled back and down at the same time, slashing and tearing at the prey. Ostrom suggested that the short metatarsus reduced overall stress on the leg bones during such an attack, and interpreted the unusual arrangement of muscle attachments in the Deinonychus leg as support for his idea that a different set of muscles were used in the predatory stroke than in walking or running. Therefore, Ostrom concluded that the legs of Deinonychus represented a balance between running adaptations needed for an agile predator, and stress-reducing features to compensate for its unique foot weapon.

In his 1981 study of Canadian dinosaur footprints, Richard Kool produced rough walking speed estimates based on several trackways made by different species in the Gething Formation of British Columbia. Kool estimated one of these trackways, representing the ichnospecies Irenichnites gracilis (which may have been made by Deinonychus), to have a walking speed of 10.1 kilometers per hour (6 miles per hour).

This dinosaur indirectly is very popular, because its image is used for the velociraptor characters in Jurassic Park. The reason for this is that Michael Crichton referred to them as Velociraptor antirrhopus, a synonym used during the late 1980's by Gregory S. Paul most notably in 1988's Predatory Dinosaurs of the World. In fact, they fused the Deinonychus' body with the Velociraptor's brain. It also appears in Jurassic Fight Club, hunting in a group against a Tenontosaurus. 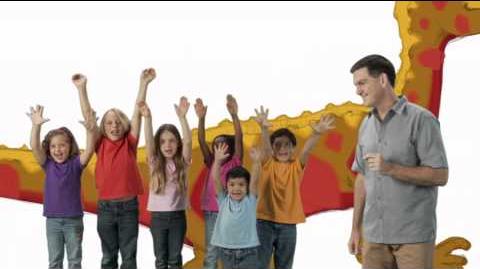