Dinosaur Wiki
Register
Don't have an account?
Sign In
Advertisement
in: Dinosaurs, Dinosaurs of Oceania and Antarctica, Theropods,
and 4 more

Cryolophosaurus (meaning "cold crested lizard") was a large theropod dinosaur, with a bizarre crest on its head that looked like a Spanish comb. Due to the resemblance of this feature to Elvis Presley's pompadour haircut from the 1950s, this dinosaur was at one point informally known as "Elvisaurus".

It is the first carnivorous dinosaur to be discovered in Antarctica and the first dinosaur of any kind from the continent to be officially named. Dating from the Early Jurassic Period, it was originally described as the earliest known tetanuran, though subsequent studies have found that it is probably a dilophosaurid. Nesbitt (et al., 2009) using the characters of Tawa found it to be a neither dilophosaurid nor averostran neotheropod but the sister group of a clade composed of dilophosaurids and averostrans. Cryolophosaurus was about 6 to 7.9 meters (20 to 26 feet) in length, which was far smaller than Allosaurus, which grew to a maximum of 12.1 meters (40 feet) long.

A high, narrow skull was discovered, 65 centimeters (25 inches) long. The peculiar nasal crest runs just over the eyes, where it rises up perpendicular to the skull and fans out. It is furrowed, giving it a comb-like appearance. It is an extension of the skull bones, near the tear ducts, fused on either side to horns which rise from the eye sockets (orbital horns). Other carnivores like Monolophosaurus usually have crests that run along their skulls, while others, such as Ceratosaurus or Carnotaurus, have large horns sticking above their skulls.

Cryolophosaurus was originally collected during the 1990-91 austral summer, by William R. Hammer and his

team, on Mount Kirkpatrick, in the Beardmore Glacier region of the Transantarctic Mountains. They were located in the siliceous siltstone of the Hanson Formation (formerly the upper Falla Formation) and dated to the Pliensbachian stage of the early Jurassic. In 1991, both Hammer and the Ohio geologist David Elliot had excavated separate outcroppings near Beardmore Glacier, sharing logistical expenses. Elliot’s team first came across the remains of Cryolophosaurus in a rock formation (altitude 13,000 feet (4,000 m) and 400 miles (640 km) from the South Pole), and notified Hammer. Over the next three weeks, Hammer excavated 5,000 pounds (2300 kg) of fossil-bearing rock. The team recovered over 100 fossil bones, including those of Cryolophosaurus. The remains included part of a partially-crushed skull, a jaw bone (mandible), parts of the backbone (30 vertebrae), hip bones (the ilium, ischium, and pubis), leg bones (femur and fibula), an ankle bone (tibiotarsus) and foot bones (metatarsals). These specimens were formally named and described in 1994 by Hammer and William J. Hickerson, in the journal Science. The name Cryolophosaurus ellioti was dervived from the Greek κρυος (meaning ‘cold’ or ‘frozen’), λοφος (meaning ‘crest’) and σαυρος (meaning ‘lizard’). Hammer and Hickerson named the species C. ellioti after David Elliot, who had made the initial discovery of the fossils. 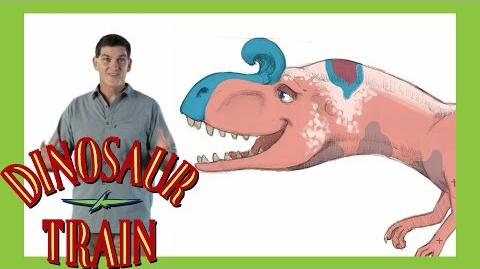