Ceratosaurus was a medium sized carnivorous dinosaur with a unique horn protruding out of the end of its skull. It was one of the earliest dominant predators. It was named by Othniel Charles Marsh in 1884 and it could grow up to 22 feet long.

It scavenged and also hunted small prey like Dryosaurus. Its main predator and rival was Allosaurus, which eventually drove it to extinction.

Ceratosaurus was a primitive medium-sized theropod that was an ancestor of Carnotaurus and other abeliosaurids. It had short forelimbs with five fingers, signs of it being more primitive than its main rival Allosaurus. Its legs were so long and muscular, with three toes with sharp talons on the end, designed for fast running. Its skull was double-hinged like a snake, and could open very wide to swallow prey bigger than its head. Ceratosaurus is most distinguishable by the horns above its eyes and the one on its nose. Its tail was somewhat short, and is some of the reason why this dinosaur itself wasn't very long. Its teeth were thin and blade-like, designed to slice through flesh.

Ceratosaurus appears briefly in Jurassic Park III when the main characters are looking for a satellite phone in a pile of Spinosaurus dung. This was originally supposed to be Carnotaurus, but it was changed to Ceratosaurus.

Ceratosaurus appears in When Dinosaurs Roamed America. It chases a group of Dryosaurus and is killed by an Allosaurus.

A pack of Ceratosaurus attacks a group of Diplodocus and Stegosaurus that got stuck in mud in the film Fantasia.

Two Ceratosaurs appear in The Animal World where they fight over the corpse of a Stegosaurus and fall off the cliff and die.

A Ceratosaurus battles a Giant Sloth in Unknown Island.

A Ceratosaurus battles a Triceratops in the film One Million Years B.C.

A Ceratosaurus makes an appearence in the Anime show, Dinosaur King.

Ceratosaurus makes an appearance in the Discovery Channel show Prehistoric where it is confusingly called Allosaurus. 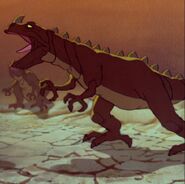