Blue is a Velociraptor that appears in Template:Film.

In the film canon Blue has dark bluish-gray skin with a white line with dark blue in the middle going horizontally from her eye orbit down to the tip of her tail, which the LEGO website states comes from the DNA of the Black-Throated African Monitor Lizard used in her creation. These dorsal patterns are identical to the ones seen on the male raptors featured in Template:Film.

In Blue's LEGO depictions, she is sand green and dark green with her striping being yellow instead of white. In LEGO Dimensions Blue lacks her stripe.

Hasbro's Jurassic World toy line is the only exception with most toys of Blue ironically having the color scheme dark green with a black horizontal stripe with no blue whatsoever.

Blue was created by InGen for the IBRIS Project sometime before 2015[1] and was the first Velociraptor to be created for the latest pack. She was created with the DNA of the Template:W, which gave her allowed her scales to reflect an irredentist blue color, giving her the distinctive pattern that she was named after.[2] Out of all the raptors that were to be created following her birth, she was the largest.[3][2] When she was born, Owen Grady imprinted on her, which allowed him to train her.[1] During her youth, she and Echo engaged in a fight for dominance over the park's Velociraptor pack, of which Blue was the victor.[2][3]

Just before the incident occurred, Blue, Echo, Delta and Charlie attempted to strike Leon, a newly hired Jurassic World employee who had fallen into her pack's paddock while trying to capture a pig that had escaped its holding pen, but were thwarted by their trainer in time to save Leon's life.

Blue and her pack later assisted their trainer during the rampage of the genetic hybrid Indominus rex when Vic Hoskins, Jurassic World's head of security, forced Owen to use them to hunt the Indominus. Unfortunately, during the hunt she and her pack mates began to communicate with the hybrid due to its raptor DNA. After Indominus took Owen's place as the alpha, Blue and her pack mates turned against the humans. Her pack attacked many of the humans that had followed them, including Barry, who took refuge in a hollow log just before Blue lunged at him and began to viciously attack him through the log. Conflicted about whether he should shoot her or not, Barry yelled her name, causing her to stop and look inside. At this point, Owen intervened and whistled to get Blue's attention, stopping her from possibly resuming her attack on Barry.

Blue and the rest of her pack later caught up with Owen, Claire, and the Mitchell brothers on Main Street. Shortly after being cornered, Owen regained Blue's and the other raptor's respect and his role as pack leader. Then Indominus rex arrived, and ordered the raptors to attack the humans. Blue, however, retaliated and rebelled against Indominus, and the hybrid responded by swatting Blue into the wall, seemingly killing her. Delta and Echo then attacked Indominus out of vengeance. Unfortunately, they were soon overpowered by the hybrid and killed. Shortly after their deaths, Rexy, Jurassic World's resident Tyrannosaurus rex joined the fight.

Later, Blue regained consciousness and rejoined the fight, lunging at the hybrid and allowing Rexy to get back on her feet after she was pushed to the ground by the Indominus rex. Blue continued to assist Rexy in her fight against the hybrid. At one point, Blue rode on Rexy's back while she smashed the I. rex into one of Main Street's buildings. Eventually, the Mosasaurus dragged Indominus into the bottom of the lagoon when the hybrid was tossed to the edge of the lagoon. After the fight, Rexy decides to spare Blue, as gratitude for saving her life, despite her unpleasant encounter with Raptors in the past. Blue then turned towards Owen, chirping at him momentarily before disappearing into the night.[1]

Blue is more intelligent and cunning than the other raptors made for Jurassic World. These traits most likely helped her become the leader of the pack. Despite these attributes, Blue has a tendency to be aggressive and usually attacks without thinking.[2] An example of her temperament was shown when she nearly attacks Leon, who fell into her paddock.[1] These traits were reminiscent of a previous alpha raptor, The Big One. Unlike the Big One, however, Blue was capable of showing affection and loyalty. When Charlie was killed by an InGen soldier, Blue viciously attacked all humans she could find in retaliation, and when Owen removed her headset, she made affectionate noises towards him and defended him from the Indominus rex, even though the fight nearly killed her.

Not much is known about Blue's relationship with Owen, other than the fact that he is one of her trainers. Blue has a lot of respect for Owen so much she would not attack him, even after the I. rex briefly turned her against her human companions.

Not much is known about Blue's relationship with Barry, other than the fact that he is one of her trainers. Like with Owen, she has respect for Barry, as he is seen comforting Blue. However, after I. rex briefly turned her and her sisters against their human companions, Blue attacked Barry. However, after Barry shouted her name from inside the hollow log he was hiding in, she seized her attack and peeked inside the log after recognizing his voice.

Although they are not seen interacting much in the film, it is assumed that Blue and Echo cooperated with each other. In their youth, however, Blue and Echo fought for dominance over the pack. Blue was victorious, and Echo earned a scar across her face and an offset jaw. Nonetheless, Echo respected Blue and tried to avenge her after the Indominus rex seemingly killed her. Unfortunately, she was killed in the fight. Blue avenges Echo's death by joining in the battle with Rexy, by forcing I. rex towards the Jurassic World Lagoon, where the Mosasaurus lives.

It can be assumed that Delta was Blue's second-in-command, as she and Delta can be seen communicating and working together many times throughout the film, such as Leon fell into the Raptor paddock and Blue and Delta were the first to corner him. When the I. rex seemingly killed Blue, Delta tried to avenge Blue but sadly, was killed in the quarrel. Blue avenges Delta's death by joining in the battle with Rexy, and forcing the I. rex toward the Jurassic World Lagoon, where the Mosasaurus dragged the monster to its death.

Because Blue is the oldest while Charlie was the youngest in the pack, she looked to Blue for guidance and commands during hunts. Charlie had such a high respect towards her leader that she gave up her meals to feed Blue, when Charlie was killed by an InGen soldier, Blue viciously attacked all humans she could find in retaliation.

It can be assumed that Rexy and Blue had never met prior to the film, however, the two united against their common foe, the Indominus rex during the final battle. Blue saved Rexy's life and fought by her side during the battle. At one point, Rexy allowed Blue to ride on her back briefly. After they kill the I. rex with help from the park's Mosasaurus, Rexy spares Blue's life despite a previous unpleasant encounter she had with Velociraptors during the first movie, presumably due to Blue saving her life. 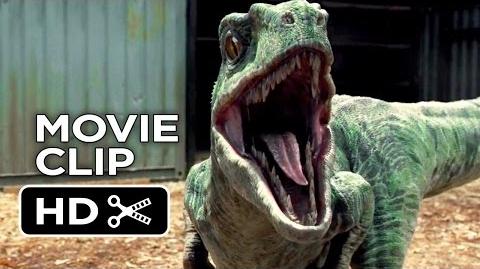 Blue and Rexy roaring at I. rex before the Indominus' death by Mosasaurus
RaptorSquadInEclosure02.png
Blue and company running

Blue appears in Jurassic World: The Game in the mission "Rebel Rebel", but is only heard and does not make a physical appearance.

Blue will appear in LEGO Jurassic World as a playable dinosaur.

In the Main Menu, Blue can be seen driving Owen's motorcycle.

Blue first becomes playable in the level "Welcome to Jurassic World". Unlike the other raptors, she and Charlie are the only two raptors that are playable during the training course. After the course is finished, Leon, who is impatient with their hunting of the pig, accidentally falls into the enclosure of the raptors and becomes cornered by them. Owen and Barry soon intervene and both the pig and Leon escape.

In the level "Under Attack" she and her participate in the hunt for Indominus rex, but the hybrid becomes their alpha when they find her and the raptors turn on the humans. Blue is the final raptor the player(s) encounter and is found cornering the last remaining ACU trooper, which allowed the Indominus to tug at him. With the combined efforts of Barry and Owen, she is pushed out of the area by a HumVee charged by Barry's rifle. She and her pack later attacks the Medical Vehicle being used by Claire but are stopped by Gray, Zach, and Barry.

In the final Jurassic World level "Main Street Showdown". When Zach goes down the dark hallway to turn on the Jimmy Fallon hologram to distract Charlie, Blue pounces on Zach, though he fights her off. She, Charlie, and Echo then become distracted by a hologram of a turkey in the Innovation Center also set up by the humans so they could escape the raptors. But after they go outside the Velociraptors corner follow as well and surround them. While surrounded, Owen manages to rekindle his bound with Blue and her pack just before the Indominus rex arrives in Main Street. During the fight, Blue stays back to assist the humans rather than fight the I. rex head on. After the battle, she and her sisters decide to follow the Tyrannosaurus rex that participated in the fight as their alpha.

Template:Quote Blue will be playable in the upcoming game LEGO Dimensions. Blue is not called by her name in the game, only simply being referred to as "Velociraptor". She can only be acquired by purchasing the team pack for Template:Film, which was released the same day as the game.

Unlike most depictions, she can be ridden by humanoid characters. There is a total of three ways to build Blue's figure with each representing a different form in-game. The first is the basic raptor configuration, the second is called "Venom Raptor" which gives her a Dilophosaurus frill and venom, and finally the "Spike Attack Raptor" that gives her a Parasaurolophus like crest and the ability to charge like a Pachycephalosaurus.

Blue appears in the upcoming toy line Jurassic World. Twisting her tail causes her to swipe while pressing her wound causes her to emit a roar. The toy will retail for fourteen dollars, unlike the toys of her pack mates which retail for nine.[4]

A Brawlasaur was made of Blue, which is predominantly colored brown with light blue markings running down her back.

Another figure of Blue in the "Bashers and Biters" assortment has a net shooter mounted on its right side that can be fired. It can also bite by pressing down on its tail. In a catalog released before Toy Fair 2015, the figure is shown to have grayish skin instead of dark green. It is unknown if this variant will be released.

The "Chomping Velociraptor Head" hand puppet is based on Blue.